Day 2 of our hike to Machu Picchu dawned early and foggy at 6 AM. After a quick breakfast, our group headed towards the bus stop from which buses departed for the site. We were sore and sleepy (a lot of us had stayed up the night drying our clothes and shoes for today), but we were finally here, we were finally going to see for ourselves one of the most spectacular wonders of the world.

When we reached the entrance gate, hundreds of people were milling about and the place looked like it was in total chaos. And it was just after 7.30 AM! We got our tickets stamped and got into the city… and found it overrun with thick fog. We could barely see beyond a couple of terraces from where we stood, and the majestic mountains in the distance were completely invisible. 🙁

It was disappointing and it had even started to drizzle(!), so we just put on our rain ponchos and gathered around our guide for a history lesson about Machu Picchu. We are glad we did not skimp out on this 3 hour walking tour, because it did not take long for us to be completely captivated with the story of this city (fortress? summer home for the royal family? ..there is some debate about the true purpose of this place), even as the fog swirled around us giving us an occasional peek at the ruins.

Machu Picchu was “discovered” by Hiram Bingham in 1911, and he believed he had found the ‘Lost City of the Inca’s’ – the secret hideout the Incan’s escaped to when the Spanish arrived in 1532. It has been proven now that when Hiram came to the citadel, three families of farmers were already living in the city and using its facilities so he didn’t really discover anything. Hiram, the douchebag that he was, also started excavating and exporting back home, nearly 40,000 ancient artefacts including ceramics and mummies, which the Peruvian government has now rightfully demanded back. (Better luck stealing shit from others next time, Hiram. Or not.) And, as it turned out, the real Lost City, Vilcabamba, was a completely different place about 50 miles west of Machu Picchu. (You were a shit explorer too, Hiram.) As you can probably tell, I am really not a fan of indigenous culture being exploited.

After this look at the colonial part of Machu Picchu history, we diverted our attention towards the site itself and what truly made it so special – all the incredible engineering marvels. Every single construction in this city of stone, is made without the use of wheels or metal tools (or mortar!). The stone walls of important structures like temples or the royal home, are cut precisely down to the millimeter and fit so snugly together that not even a piece of paper can slip between the gaps. This should be practically impossible without the use of modern machinery and yet… there it was.

There are 700+ terraces within this complex, some were agricultural laboratories to grow special crops and exotic flowering plants, homes and temples that looked like they were constructed yesterday and with much finesse, every construction blending in naturally with the sloping mountainside, complete with an extensive, expertly engineering drainage system that STILL worked and somehow.. also limited erosion!

The most fascinating aspect of Machu Picchu for the engineers in the group (me haha #geeek) was this — Machu Picchu lies on two fault lines, and yet, none of the Incan structures here (or in the surrounding region) have suffered any losses due to earthquakes over centuries. The stones that were cut precisely to fit each other, supposedly “dance” or jiggle during an earthquake only to fall right back into place once the seismic activity has passed. Our guide said that the Spanish created structures of their own to the city but those didn’t last beyond the first few earthquakes. Meanwhile, except for the thatched roofs that have long since been lost to the elements, everything else the Incan’s built, stands exactly the way it did on day one.

One of the most revered sites at Machu Picchu was the Sacred Plaza – a place devoted to the worship of the most supreme of all Incan gods, the Sun or the Inti. This plaza housed three structures, the Intihuatana (supposed to be sundial of sorts and especially sacred during the annual solstice events), the Temple of the Sun (or the Main Temple) and the Temple of the Three Windows.

By late morning, we were done walking all around Machu Picchu and had free time to ourselves within the complex. The early morning fog has dissipated, but thick clouds still obscured the view of the mountain behind the site, Huayna Picchu. Our friends opted to hike up this mountain, a short but extremely steep (and difficult!) trail up the mountain and back. We opted out and instead choose to climb up to the Guard House, a vantage point from where we would have had a great first look at Machu Picchu the previous evening had it not been for the pouring rain. We sat there amidst a steady stream of crowds, and waited for the clouds to move away but feeling happy and satisfied nevertheless that we had finally finished our journey.

Just one last thing remained to wrap up our day. On our way out, we stopped just out of the exit to stamp our passports with the Machu Picchu stamp to officially cross off the ‘visit a wonder of the world’ bucket list item. 🙂 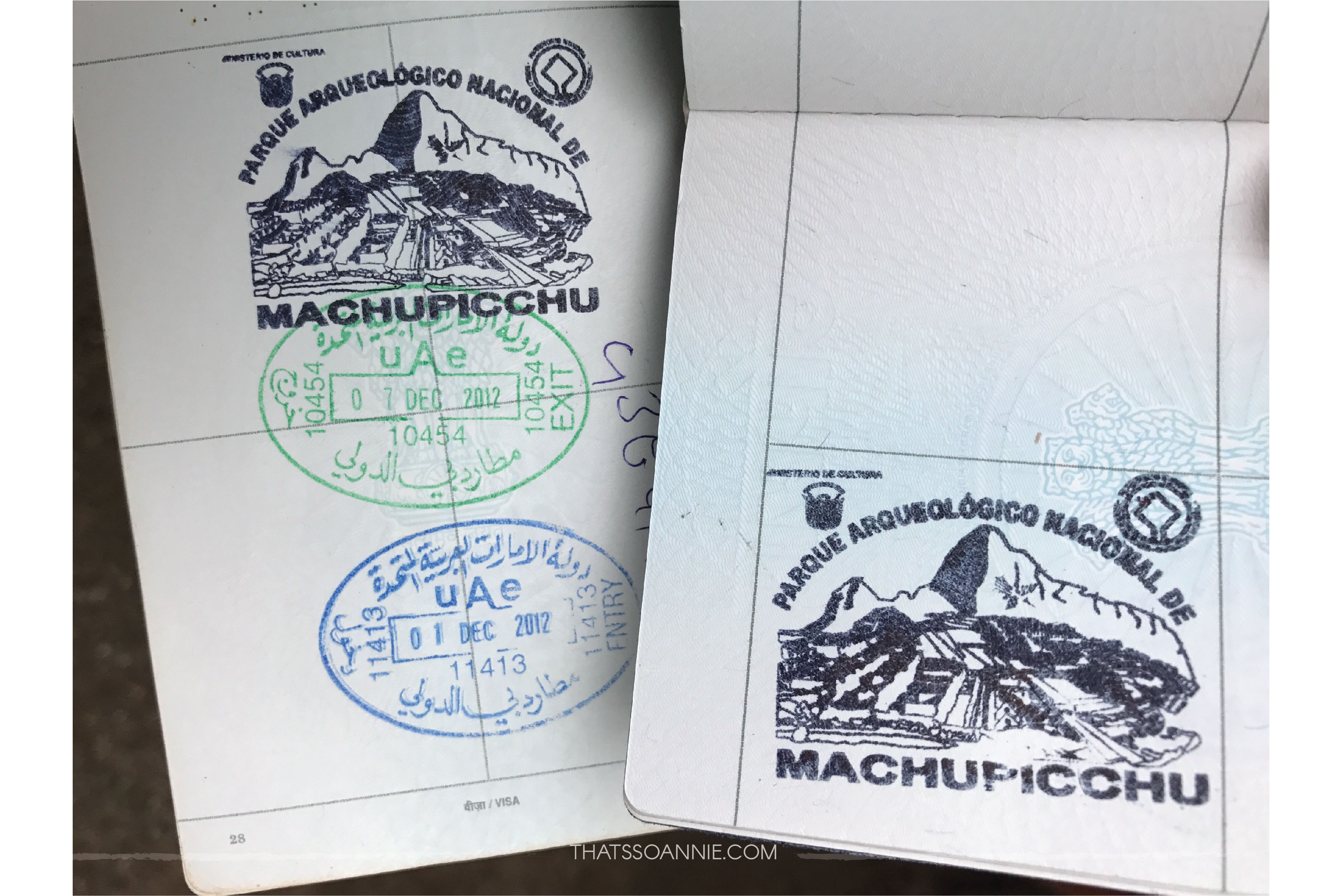 Until next time love and light,