Day 7: of alien planets and the last iceage

We were up and ready to go early this day. We were due for a glacier hike at 10 AM, and had absolutely no idea if it was even going to happen (given the still rainy weather) and what to even expect. Nevertheless, we layered up and met with the lovely people from Mountain Guides at the entrance of Skaftafell National Park.

Turned out the hike was definitely happening and right on schedule (the hikes from the previous day had also happened, even through the rainy weather!). The guy was poorly dressed to be out walking around on glaciers, so we rented some clothing and boots from the tour company. Once we were bundled up in our best east-coast-weather clothes (remember New York City gets much worse than this in the winter!), we set off towards the glacier in a mini-bus.

The bus dropped us off a little way off the “tongue” of the glacier (this is the edge of the glacier ice that is slowly pushing forward through the coarse ground underneath) which was the access point onto the glacier. Our group of 7 people put on our hiking crampons and picked up our icepicks, slowly making our way towards the ice.

It was the most surreal feeling to walk on a glacier. This was the place where they shot the landscape for Interstellar’s Dr Mann’s planet, and it looked every bit as alien as it was portrayed like in the movies. Our guide was very enthusiastic as she pointed out the different areas where the movie was shot. She said that the movie crew “bought” the glacier for a period of six months, which meant that they bought out all the tickets on every available glacier tour, provided by all available companies and hired the guides to be the support crew for the movie set. Wow! :O

We walked around for a while, occasionally digging up 200 year old ice to munch away (11/10 recommend as a bucket list item!), jumping over crevasse’s (this was a little too risky but you gotta jump when you gotta jump!). After about an hour on the ice, we returned to our bus for the trip back to the entrance at Skaftafell National Park.

We were so pumped after the glacier hike, that we couldn’t stop talking about it as we made out way back onto the road (it was raining again by now). We were so immersed in our excitement that we totally FORGOT to check out the nearby waterfall Svartifoss! 😐

This is one the nicest looking waterfalls in Iceland, surrounded by basalt columns and is supposed to be a short walk from the parking lot of Skaftafell National Park. 🙁 Ah well, next time then!

After an hour on the road, and making a quick pitstop by the stunning waterfall Foss á Síðu (we missed out on checking out Stjórnarfoss, another pretty and unique-looking waterfall on this route), we turned right towards Fjaðrárgljúfur. This is a gorgeous canyon which was carved out by the flow of the Fjaðrá river during the last iceage. How cool is that! 🙂

You can walk up from the parking lot towards the vantage point in the picture above, and continue on further upwards towards the rest of the canyon. Instead, we took another smaller trail which led us down towards the river bed. After a lazy afternoon of walking among the smooth pebbles of the river bed, and checking out hidden niches covered with wildflowers and moss stones, we made our way to the village of Vik.

We reached Vik in just under an hour after leaving the canyon. It was overcast and the rain came in spurts, so we decided to drive around for a while looking for a good view. We found one near Vik i Myrdal Church, from outside the most secluded cemetery I may have ever seen so far.

The coastal village of Vik is perhaps the most famous tourist spot on South Iceland, made famous by the black sand Reynisfjara beach which connects Vik to the nearby peninsula of Dyrhólaey. One of the trademarks of this village are the basalt stacks that jut out from the sea just off the coast. Legend says that these spiky columns, named Reynisdrangar, are trolls dragging a ship towards the shore who were petrified by the first rays of the sun.

Reynisfjara, while being one of the most beautiful beaches I have ever set foot on, was CRAWLING with tourists. They were climbing over rocks, taking pictures by venturing too close to the giant waves and ignoring any and all warning signs that said NOT to do these things. And this was on a rainy day, so I can only imagine what this beach must look like on a sunny day. I’ll be honest, after spending an isolated week in Iceland, trying to find a relatively quiet spot among the crowds is not fun. We left quickly, and made our way towards the other end of the beach, Dyrhólaey. 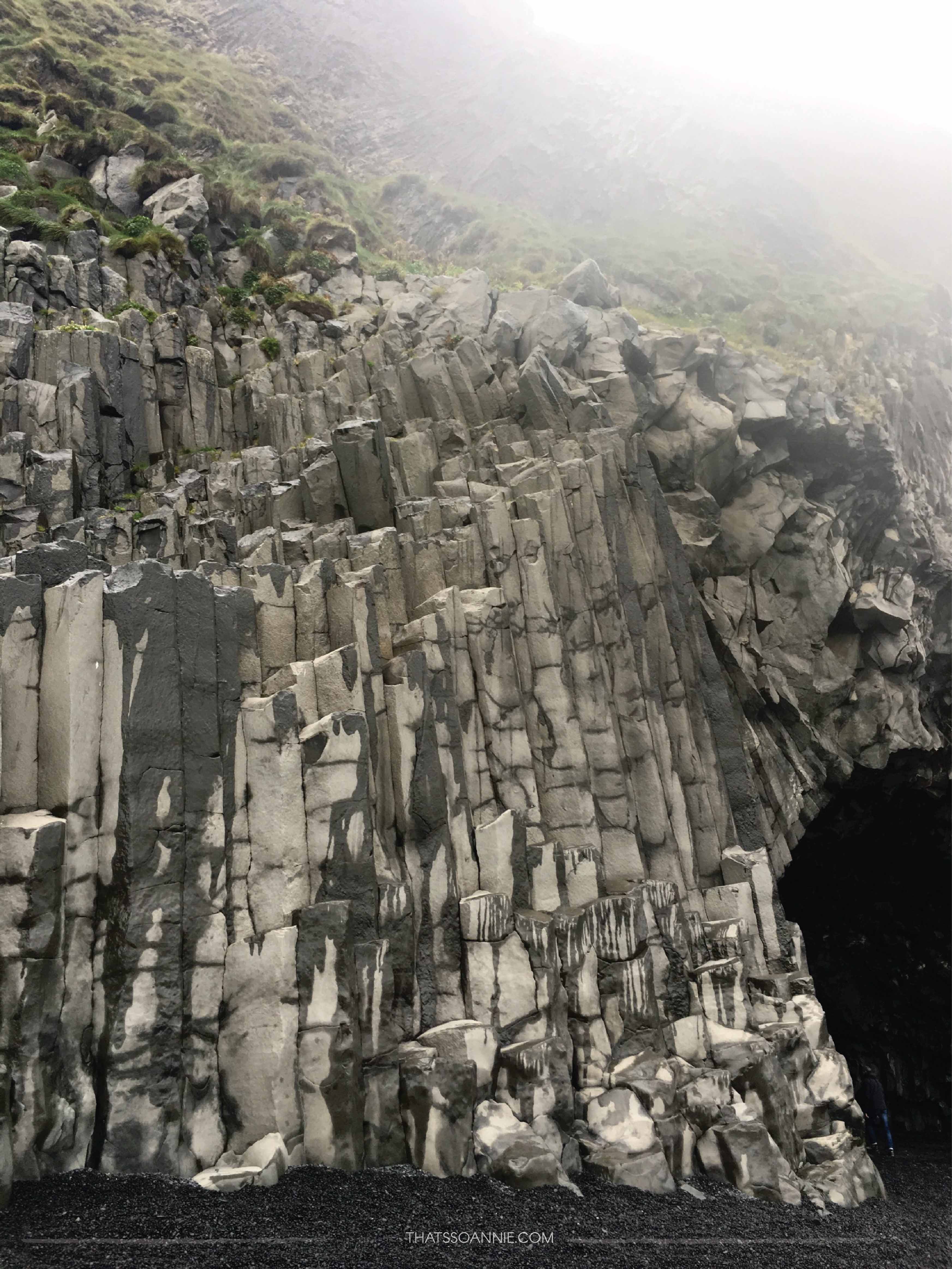 We did not anticipate the tricky and winding upward drive that was involved in reaching the highland of Dyrhólaey. The rain now falling in a steady drizzle made this a difficult drive, but we made it to the top. I opened the door to a full blown gust of wind that seemed like it would sweep us clean off the cliff! I got back in the car immediately and it took the guy a full ten minutes to convince me that I was NOT going to get blown off the cliff haha 🙂

We donned out rain ponchos, grabbed out tripod and made a mad dash towards the cliff edge. The view from the top looking down towards an endless stretch of black sand beach that met the horizon, flanked by the wide expanse of the Atlantic Ocean on one side was breathtaking.

Within no time it got much too windy and rainy to function. We hurried back to the car (I was relieved to see that it hadn’t been blown away haha), and slowly made the descent back to the ground. It was pitch dark by the time we got back on the Ring Road.

Thanks to the darkness and the rain, we breezed past a bunch of touristy spots we really wanted to see. 🙁 Bone tired from all the activities of the day and in absolutely no mood to cook our own food in the freezing night, we stopped for a quiet quick dinner in the small town of Hvolsvöllur. (They weren’t kidding when they said that food and drinks are VERY expensive here!)

We were sleepy by the time we reached the campsite at Þingvellir National Park where we quickly turned in for the night. We were so tired that we did not even give the faint northern lights a second glance!  We just wanted to get into the sleeping bags without wasting any time because we intended to make the MOST out of our last day of the road trip tomorrow.