Day 4: The geological wonders of the north!

We woke up to a cold, grey and rainy morning – everything we did NOT want it to be. Pbbbt. 😐

A dense cloud cover loomed around the campsite, ruining any and all plans of hanging around in Húsavik, the whale watching capital of Iceland. I had been looking forward to seeing Orcas before I was even on the plane out to Iceland (Orcas are one of my favorite creatures in the world!), but the terrible weather kept us from venturing out into the sea. Whale watching will have to wait for another visit. 🙁

We had the community kitchen to ourselves, and over yet another Maggi breakfast (how Indian are we haha, Maggi noodles are undoubtedly our country’s favorite snack!), we decided today was going to be all about Myvatn, one of the most touristy areas in all of Iceland.

Myvatn (pronounced “mee-vahn”) is a large lake situated in an active volcanic area of north Iceland, surrounded by hot springs, active and dead volcanoes, mud spots and lava fields (this lake itself was created because of an eruption and consequent lava flow).

Our first stop was the Grjótagjá cave, made popular by Game of Thrones (a show I do not follow…yet).

A nondescript hole in the ground entrance to this underground lava cave is easily accessible by gravel road, and the climb down into the cave over boulders is pretty easy. A thermal spring flows quietly through, and the afternoon light reflects off the blue water, and steam wafts up from water that is about 50 degree centigrade. It is not really romantic – tourists scramble to get the right picture, the check out the acoustics of the cave with random shouts, and every few minutes someone wonders if they should skinny dip (no, don’t do it).

We decide to detour towards the nearby volcanic crater of Hverjfall. At 2500 years old, the rim of this crater is almost perfectly circular except for a collapsed portion in the south. It took us about 20-30 mins to get to the top, huffing and puffing as we trudged along with our total lack of fitness, but when we got to the top the view overlooking the nearby lava fields and steaming vents (and the inside of the crater too!) was well worth it.

We lingered around for a bit (trying to stack more stones on to existing stacks of stones piled everywhere by tourists, supposed to be a wish for a lucky journey) then headed back down, excited at the fact that we had just climbed a dead volcano! 😀 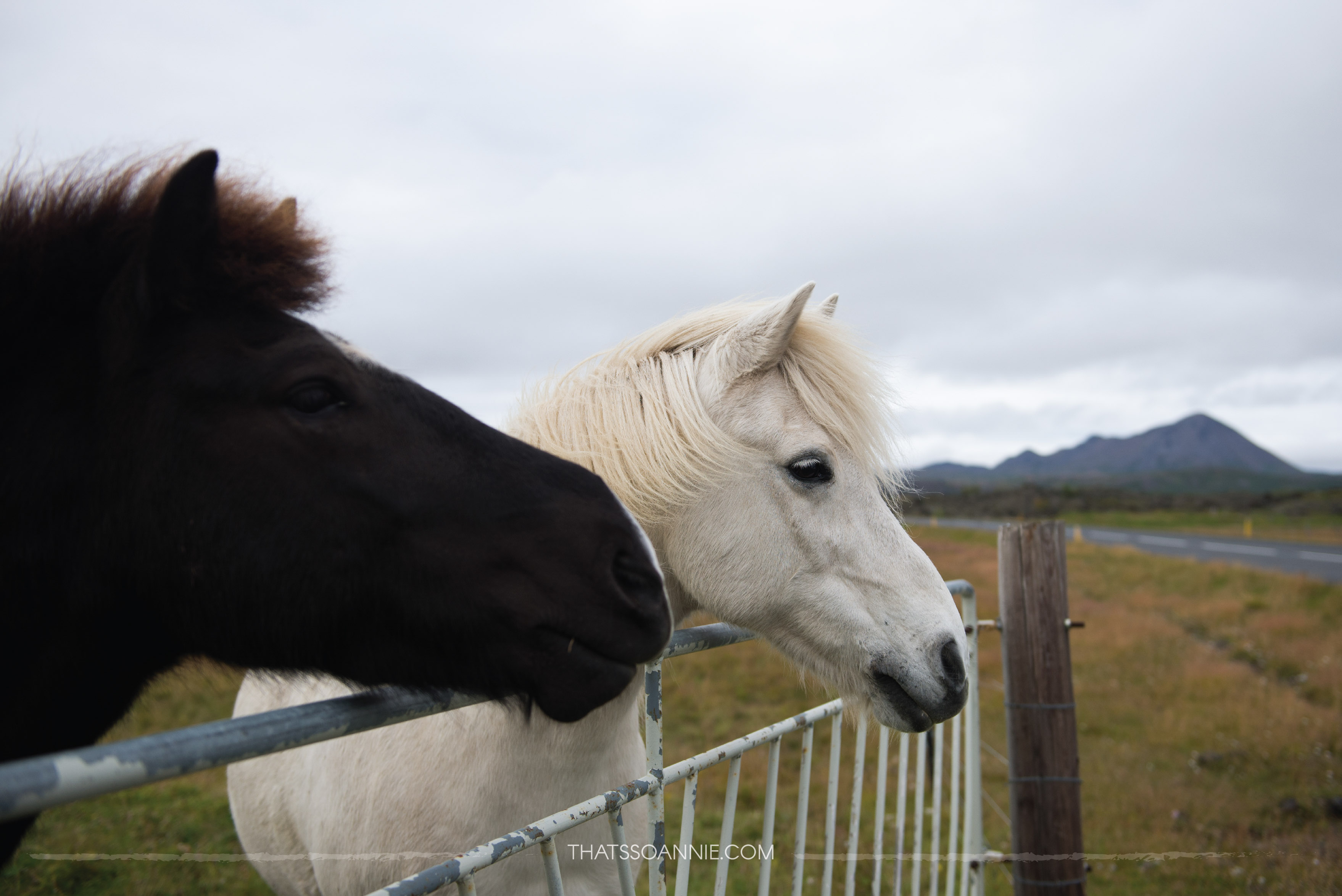 We met our most enthusiastic group of horses yet at the base of the volcano. These two gorgeous beauties (and three more friends) came trotting to us waiting at the fences to pet them. The white one was the attention hogger and wouldn’t let anyone pet any other horse haha! 😀

After saying bye to the horses we set off towards Námafjall, an active volcanic mountain, at the foothills of which lie bubbling sulfurous mud pots (called solfataras) and steam springs (called fumaroles). This was the first of those “alien landscapes” – nothing grows here, nobody lives here, there is no fresh water to be found, the ground is sterile and saturated with minerals and the stench of sulphur follows you everywhere you go. Námafjall was unlike any place I have ever been to before!

Námafjall was the first time that I saw signs warning visitors not to stray off marked paths. Tourists that do not respect nature and how dangerous it can get, are one of my biggest pet peeves. I have read about visitors falling into boiling acid pools at Yellowstone National Park looking for that perfect picture or a selfie, and I just can’t fathom why someone would want to take a risk like that with their lives. And I am a photographer, I get the need for that perfect shot! There is no need to risk your life for it so please always be careful and aware of your surroundings. 🙂

Next, we started towards the active volcano of the region, Krafla. Here, scientists have been able to find magma at a depth of just 2 km beneath the surface. Wow! Krafla last erupted between 1975 – 84 and set the whole region on fire, when several fissure vents opened up to pour out lava across the region. The steaming vents still exist today, throwing up a cloud of steam, always reminding visitors that an incredible amount of volcanic activity lies just under.

Out of the two famous craters in Iceland, one of them is located at Krafla. The Viti crater is a short walk up from the parking lot, and contains a brilliant blue pool of water. You could walk all around the rim (the vantage point offers a bird eye view of the region), but because we were short on time, we decided to move on.

We moved on towards Dettifoss, one of the grandest waterfalls in Iceland. If you thought you recognize this waterfall from somewhere, you are right – it features alongside the opening sequence of the sci-fi movie Prometheus.

There are two routes to get to Dettifoss from the Ring Road – the newer tarmac Route 862 and older gravel Route 864. We took the 862 because it is also the quicker way. There is a large parking lot near the waterfall with restroom facilities, and in the distance you can hear the roaring rush of the water. The noise makes it sound like the waterfall is just a few steps away, but it turned out to be a solid twenty minute walk before we could finally get Dettifoss within our sight. The paths are marked here with distance and direction, and the surrounding vegetation is ‘protected land’ given its delicate nature. Once near the cliff’s edge (but still can’t see the waterfall), the trail splits into two, one going towards Dettifoss and another leading upstream towards the other waterfall Selfoss.

The rushing waters of Dettifoss were so powerful that when they dropped over the edge they threw up a cloud of mist that settled over the whole area. Everyone and everything around was sprayed with water, and it was a task standing there wrapped in rain poncho’s trying to protect our camera and still attempt a shot! A rough trail leads downstream along the waterfall, taking you much closer to the cliff edge but we did not want to risk taking the camera right into the middle of the water spray. We lingered around at a high vantage point, and I am glad we did because this is one of my favorite pictures from the entire trip. 🙂

It was pitch dark by the time we left. We decided to make our way to the Egilsstaðir campsite, which was 2 hours away. Over Bollywood songs and excitedly talking about all our experiences so far (we were halfway done through our road trip!), it felt like we reached the campsite in no time at all. Most of the campers were already asleep by the time we reached.

10 minutes later, he was excitedly rapping on my side of the window and pointing towards the sky. A HUGE river of faded green had opened up in the middle of the starry sky, and it was flickering about like a ribbon. 🙂

We rushed to get our tripod set up for a picture but the lights flickered for only about three minutes. It was incredible, and nothing like the faint aurora activity we had seen yesterday. You just ….knew that this was the real deal. Something that will stay with you forever.

We went to sleep happier than we have been on this trip so far. Little did we know that the most amazing day was going to come up next! 🙂